Tom holds a degree in Games Design from the London College of Communication, and is a published independent games designer and developer. Before joining Arcade in the same capacity, he was a Senior AR Developer at AR content creation tool developer and agency Zappar for four years.

We thought we’d get to know him a bit better, and learned that we’d better keep him away from the fireworks on Bonfire Night…

What are you most proud of in your working life so far?

A game I built during university in my second year called Kaleidoscope Runner. It was designed as an ultra-casual game – tap to jump is the only interaction – with escalating, mind-bending challenges. We only produced a prototype, but it remains one of my favourite pieces so far for simplicity and gradual challenge.

What are you most looking forward to with Arcade?

I’m looking forward to joining a creatively ambitious group, who are looking to push the boundaries of what AR is really capable of in physical spaces – which is, quite literally, an underdeveloped space in the industry.

What excites you most about immersive technology?

What’s your favourite thing to do in your spare time?

I’m big on podcasts, and I like the gym for high intensity exercise – it makes a good counter-balance to programming, to go and do something physically taxing.

What music do you listen to?

I’ve got a broad taste, though I’ll listen to dance music when working – usually something high-tempo like drum and bass, or perhaps house.

Anything else we should know / you’re prepared to admit to?!

I got hit by a firework when I was about 6 years old. Thankfully, it only singed my eyebrows. Hopefully it didn’t change much! [That explains a few things – Ed]

Thanks Tom, looking forward to working with you!

Arcade is pleased to announce that we have been invited to take part in CogX 2022, with co-founder and CSO Alex Book participating

The Keeper of Measurements: Metric Mayhem has launched today at the National Physical Laboratory as part of their World Metrology Day celebrations. Visitors to 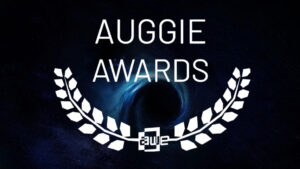 Keeper of Paintings Nominated for an Auggie

Just a couple of weeks after its launch at The National Gallery in London, The Keeper of Paintings and the Palette of Perception has